No, our parking space doesn't look like this because we throw trash around.  This is the location of a small business which Fidel, assisted by Moises, has started our of our home. 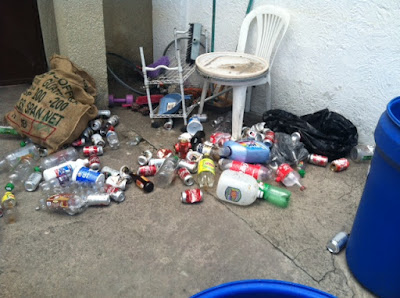 About six months ago, a small recycling store opened up across the street from Casa de Esperanza.  I happened to mention to Fidel that maybe he should start collecting our recyclable products and take them over there to get a little (very little) money.

I was absolutely delighted when the next day he presented me with a flyer, introducing himself as "Fidel, el reciclador" (Fidel the recycler).  He explained that he would be happy to come and collect recycling from any homes in the area, and provided all his contact information. 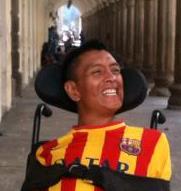 He had written and printed the flyer using his computer, and had taken it to a local copy center to be duplicated (he paid for this himself out of his monthly spending money).  He then went around town distributing these announcements to our neighbors.

In a short time, he not only was collecting recycling, but neighbors were bringing it by our house to drop off.


So how, you ask, does a young man who can't use his arms sort through all this stuff?  The same way he does everything else--with his feet.

First, Moises helps Fidel to dump out all the trash which is normally stored in barrels outside our home. 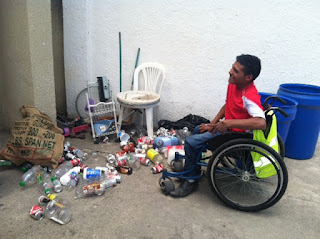 Fidel then goes though and pulls out all the glass and plastic that he can, sitting sideways on his chair, driving it with one foot as he grabs the recycling with his other foot.  He then drives over and puts the item in the proper barrel.

You really need to watch this video!


Moy will pick up anything Fidel can't, but honestly, he gets most of it!

Fidel then uses his power chair to drive over and crush any tin cans remaining on the ground.  Not the way I would have suggested, but it works for him.  Moy then collects the cans, placing them in their barrel.

A few times a month, Fidel hauls all of this over to the store across the street and earns a bit of cash, which he shares with Moy.

In a country where employment for those with disabilities is almost impossible to find, Fidel has stepped out and created his own.  While it may not seem like much, there are many able-bodied people in this country who support their families by collecting recycling, so this is a "normal" occupation among the poor.

What are his plans for the future?  Fidel hopes to expand his business to the point where he can someday rent his own house and hire someone to care for him.  Lofty dreams, to be sure, but I think he'll do it. 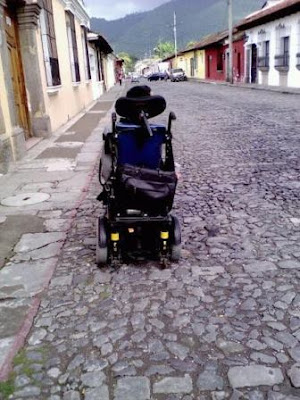