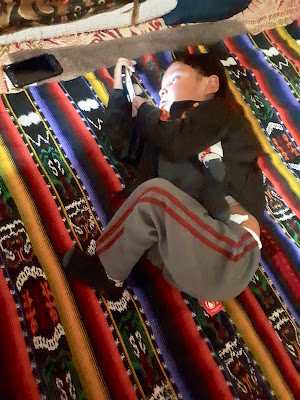 Lester is a six year old from Santa Maria de Jesus who was born with an irreparable heart defect and often appears blue from lack of oxygen.  When I met him more than three years ago he was not expect to live much longer, and we helped get him a wheelchair so he could enjoy the freedom to move around.

Today, Lester has grown and weighs much more than he did three years ago. While his health has deteriorated and he has contracted Hepatitis he continues to thrive emotionally under the loving care of his mother Brenda.  Doctors have told her he does not have much longer to live, but she is doing her best to make each day count.

With his added weight his wheelchair is now too heavy for his mother to push up the steep mountain side to their home.  She came asking for help to find a stroller which would be lighter and more flexible to use on the rough terrain.  After seeing where they are living (from the village for Mom decided the hike up would be too strenuous and even dangerous for me) and visiting with Lester at his grandmother's house along with Sandra, our school psychologist, we came up with an idea.

A three wheeled jogging stroller would be the best solution for them.  I describe this to Sandra, asking her where we could get one in Guatemala, and knowing one would be quite expensive if we found one.  She had heard of these but only seen pictures of this type of stroller.  We would have to investigate further and told Mom we could not make any promises but would do our best to find something that would suit her needs.

A little after a week had passed since our visit, I was praying for Lester.  I felt God was going to teach me something through our involvement with this family, but frankly wasn't looking forward to what I would learn.  Usually these situations teach me to submit to God's sovereignty in the life of each individual and often these lessons are painful.  I had accepted that there was nothing we could or should do to prolong his life, but I wanted him to have the best life he could for as long as God chose to leave him with us. 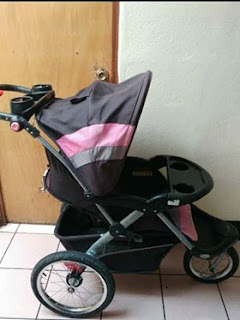 Somewhat in frustration I finally prayed, "God, you know what I need for Lester.  Now find it.  I don't know where to look."  After I finished praying I went to my computer and turned on Facebook.  The first posting I saw, literally the first thing on my screen, was a woman in a neighboring village who was selling the PERFECT jogging stroller.  I could not believe it.  I contacted her immediately, hoping we could find the funds to purchase it.  After discussing the situation with her, she agreed to sell it to us for 1000 quetzales, roughly $135 dollars.  I could squeeze this out of our limited budget and a deal was struck.  She even delivered it to me, bringing it on the back of a motorcycle.

Last week I was able to take this up to Santa Maria and deliver it to Lester and his mom.  It fit him perfectly, and he could sit up with stability in the stroller, but it would also recline to allow him to
sleep in it if he wanted to. 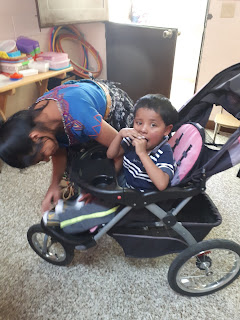 After we had him sitting pretty, Mom clung to me sobbing that she didn't think she would ever have anything quite so grand for her son to enjoy.  It was with great pleasure I related the story of God's special provision of this chair for her boy.  I asked her to remember each time she looked at the stroller that God was with her as she walks this difficult path with Lester.  He provided the stroller she needed and she could trust Him to provide what she would need in the future to care for him.  We talked about how God would be with her until He took Lester home. 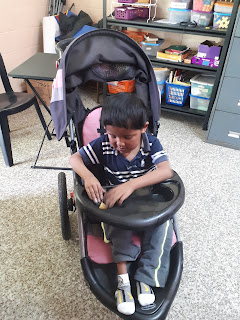 This was not an easy conversation to have.  It was doubly challenging to have in a different language with a woman from a different culture and background.  It is far too easy to give out platitudes about God's will in a situation where a child is dying.  It is much harder to admit that I don't know why Lester was born with this condition, but that I knew beyond a doubt He was cherished by the God who created him, and would be welcomed into the arms of Jesus when he finally went home to the Father.  I could give her this stroller as concrete proof that God not only sees but cares for Lester.

So what did God teach me?  Once again, to respond in obedience to His direction in how to serve each person who comes to me, trusting that He can and will provide what I need.  It was so easy to see this with the stroller.  He also taught me, though, that He would give me the right words to speak to comfort a mother's aching heart if I was only willing to step into her pain with her.  I have a feeling Lester and his mom are not done teaching me yet.
at July 15, 2018