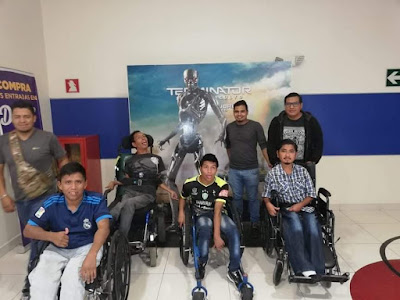 After the years living in San Pedro, our young men have definitely become part of the community and have made wonderful friends.  A few weeks ago, a friend from town arranged to take all four of the guys and two of our companion-caregivers to see the opening of the Transformers movie in a nearby town.  This is no small feat when you consider four wheelchairs needed to be transported in addition to six people, but they did it all on their own.

My desire has been for the guys to have as "normal" a life as possible, and each day I see this happening more and more. 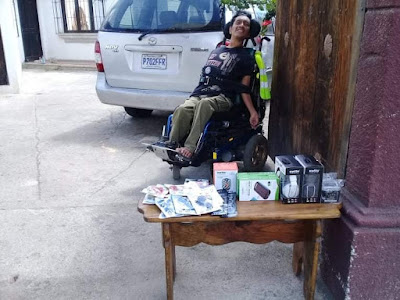 Fidel is our entrepreneur.  He saved up enough money from recycling to purchase and begin selling small electronic accessories for phones, tablet and computers.  While not having a formal store, each day you will find him at a table at our gate ready to make sales.  Again, this is something he has done on his own.  The other day I stopped over at Casa de Esperanza, and Fidel was gone, even though both caregivers were home.  When I asked about this, I was told that another friend had taken him into Guatemala City to buy more items to sell.  His initiative and independences astound me.  He has grown so much from the self-involved, adolescent to become a mature, self-directed young man.  I love it!  (And I get a discount on whatever I buy.)

Since Fidel has given up his recycling due to being occupied with his "tienda," Roberto has taken over this activity.  While not as focused as Fidel, he is learning to operate his own "business" and make financial decisions and is learning from his mistakes as well as his successes.  Roberto has also taken quite an interest in gardening, and has assumed responsibility for the small garden in the back of the house, as well as caring for our dog, Texas. 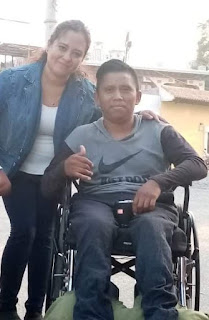 I laugh that Moises is 22 going on 12, but not in a bad way.  He has a number of responsibilities around the house including cleaning the bathrooms, which he HATES. (Who doesn't?) While needing reminders at times to do his chores, he more than makes up with this with his cheerful attitude and unfailing humor.  Our lives would be so boring if Moy wasn't part of them! 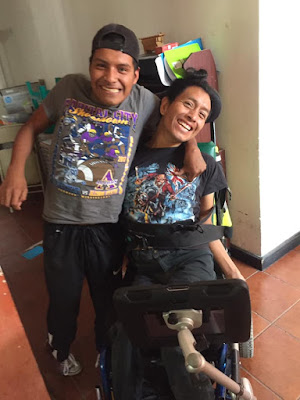 He is also working more seriously at physical therapy, and is now able to stand alone, and walks with minimal assistance to help him maintain his balance.  He says he wants to learn to drive, and I've told him I won't discuss this until he can control his movements enough to walk with a walker.  I think this is his biggest motivation, as he can actually get around faster shuffling in his chair.

What does the future hold for our guys?  I don't know.  What I do know, however, is that they are more engaged in life and productive than they were a few years ago, and much moreso than if they had continued to live in an institution.

So, thank you.  None of this would be possible without your prayers, encouragement and support.  We are grateful.