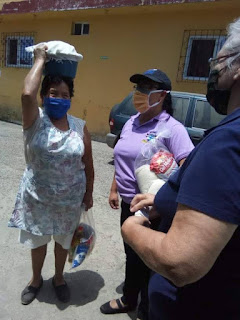 We began giving out food to the hungry is a "small" way, focusing on the 100 seniors adults in the breakfast program in Santa Lucia, where our woman's home and our tutoring center are located. A home church felt led to donate to our ministry and we decided to use their resources in this way rather than saving it for future needs.  We worked through the social service office there, and we were able to personally deliver the food bags to each person with the help of the Women's Office, under whom we work. 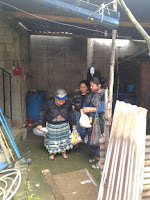 Then the staff working in our homes began taking food to those in their home towns who they knew were hungry. 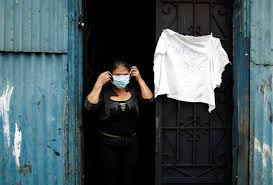 People who need food are placing white flags outside their homes.  Some are standing on street corners with flags, begging for food.  In one afternoon we gave out over 15 bags.  We have learned, though, that this is not the best way to help, since some are exploiting the system and selling the food they have received, or are paid to stand on the street and beg, and then turning the food over to their "employers" who would in turn sell it.  I still, though, carry food with me when I travel because I can't pass by some who are frail and elderly and not help. 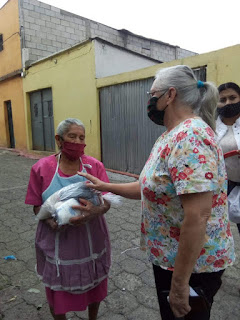 Gradually, people started coming to my door asking for food.  We began giving what we had.  After one afternoon in which I gave out 27 bags of food in an hour and a half, it became apparent we needed a more structured approach.  We started "sign ups" and people were assigned days and times to come for their food.  These people are our neighbors, and we could not turn them away when we had the means to help them. 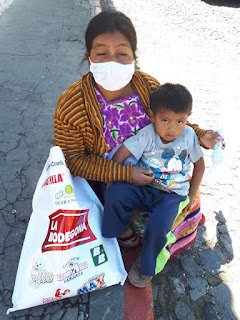 This last week has been the most intense yet, and I have to admit the most tiring.  In 8 days we have given out over 350 food bags to residents of our town, but because of the large amount of need, most of these only contained about 5 # of beans and rice and a bag of enriched hot drink.  These bags cost us about $10 each.  We did this entire distribution from the door of my house, if you can imagine with the help of the residents of our men's home and their staff.

I can hardly get my head around the idea that in 8 days we spent over $3500 on this project, but God has provided and we will give as long as possible.  Going forward, we have decided to only continue to give only to the elderly, 65 years old,  on a bi-weekly basis unless we receive a special large donation to once again bless our town.  We identified these elderly through our large distribution and have invited them to come every other Saturday for a food bag, as long as we have funds to do so.  You cannot imagine their gratitude and the tears that come when we tell them we are giving them food to remind them that God sees their need.  Humbling beyond words.

We are also working the the sub-mayor in a village near here which is part of Antigua.  His area has not received any help from the city, and he knows his people well and they have been in desperate need.

Though the police are in short supply these days, they have been serving as our go between with this public official, taking out bags of food to those in need at night after our 6 pm curfew.  To do so during the day is too difficult, since they are instantly swarmed by people asking for food, some of who undoubtedly need it but others who do not and just see an opportunity to get something for nothing.  Working with the sub-mayor has been very helpful in this regard.  They are concerned that I believe they are actually taking the food to people who need it, so each night they go out they send me pictures or video of each stop they make, as well as calling me on the phone when some of the recipients want to thank me personally. 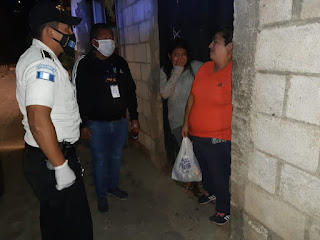 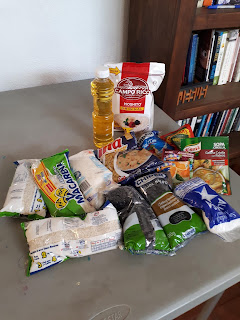 We send out about 20 bags each week with our police friends, and these folks receive a bit more, including salt, oatmeal, sugar, soup mix, pasta and oil.  Still not a lot but the basics of food here.  These run about $15 a bag, since prices here have shot up considerably since this started.

Just yesterday I went with Doña Betty, the cook at our men's home, and Rosey, who is married to one of our caregivers, to a Colonia far behind one of the towns near here.  I didn't even know this place existed until Betty told me about it. 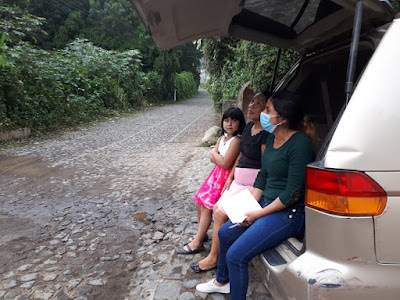 We are so grateful to everyone who has made these food distributions possible through your generous donations.  If you have thought that your $10 or $25 couldn't do much to help, you now know that it will help feed a family for at least a week.  It does matter, and like with the fishes and the loaves, God multiplies what we have.  I have yet to run out of food when there is a need, though sometimes we get down to the last bag of beans before more come in.

If you feel God is leading you to help feed our friends here in Guatemala, you can donate through our website, or send a check to Reason to Hope, Inc., P.O.Box 284, Elkhorn, NE 68022.  Your donations is tax-deductible, and will go straight to us in Guatemala.
at July 09, 2020