If you have been following my posts on Matthew through Facebook, not much of this is new, but there are a few added details.

This is Matthew a 20 month old who is our newest and youngest client at our center in Santo Tomas. 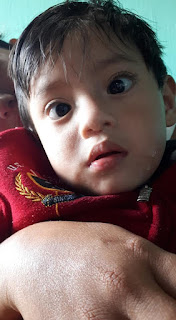 Matthew arrived with a variety of needs, including cerebral palsy and crossed eyes.  Born prematurely along with his brother, Jeremy (yes, the family likes North American names!), his family reports that his problems really began after he suffered respiratory arrest when he was 3 months old.  As is typical here, it is impossible to get medical records, but, whatever the cause he has significant developmental delays.


Though his mom only has a sixth grade education, she has diligently searched for help for her son.  Through the internet she has found exercises to do to help strength his muscles and stimulate his mind.  Everywhere she looked for help she was turned away.  Then she heard about our program through the city hall in Santa Lucia and was the first to see me when we opened our doors for the new year.

Our first step was to send him to Hermano Pedro to see a pediatrician and be evaluated for possible eye surgery.  This had been recommended to the family in the past, but at the cost of over $1000 was far beyond their means.  After receiving my referral, Mom and Grandma had Matthew at the doors of the clinic at 5 a.m. to make sure he could get in to see a pediatrician.

At the time we had no idea how important this connection with a doctor would be (more on that later).  The pediatrician did in fact recommend he see a neurologist at the hospital, as well as one of the ophthalmologists who would be coming down with a surgical team.

I began working with Matthew at his home a couple of afternoons each week, since it is nearly impossible for his mom to wrangle him, his twin brother and his 7 year old sister Karen for the 3 km trip to the center in Santo Tomas.  He loved these sessions. 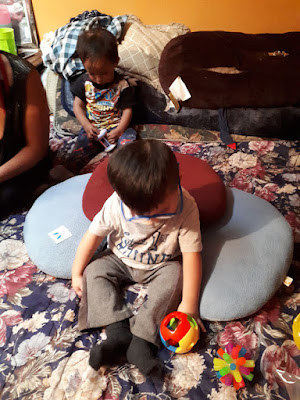 One of Matthew's needs was a wheelchair, since his size was making it harder and harder for his tiny mom to carry him. 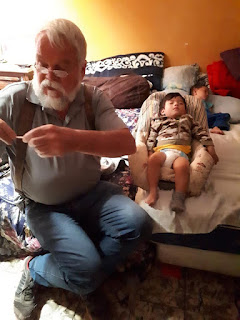 In his typical manner, Dick Rutgers was right on top of this request, and only a few days later, he and Bryan joined me in measuring Matthew for a chair.  Dick thought he had the perfect chair for Matthew in the warehouse, and the next week we were back at the house, fitting Matthew with his new wheels. 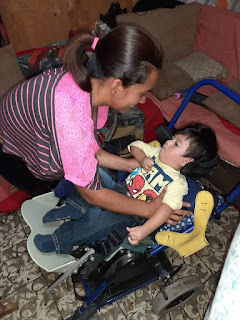 The following week, Matthew saw the neurologist and was scheduled for an EEG and also a hearing test.  Matthew does not speak or imitate sounds, and mom rightly has been concerned about his hearing.

Before he could even be seen for the EEG, Matthew had the first of what would be a series of seizures.  This is where God's Providence in having us already connected with a pediatrician and neurologist was so very important.  While I don't quite understand the diagnosis of "structural epilepsy," and while no one can explain why his seizures only started now, we are grateful for these connections to help his family manage this new challenge.

As is often the case, it took a bit of trial and error, but Matthew is now on medication which is controlling his seizures.  These medications, however, make it hard for him to sleep, and he is unusually irritable.  This has been so challenging for the family, but they are hanging in there.  Just yesterday the doctor prescribed something to help him relax and hopefully the whole family will get some sleep soon.

So for now, our infant stimulation is on hold while we resolve his medical issues, though we continue to visit the family a few times a week and are in frequent phone contact.


Eye surgery is in the distant future since his seizures need to be under control before he can undergo anesthesia.  We are praying, too, that we can find the trigger which started the seizures, but we may never know.

Please keep this family in your prayers, as well as the doctors and those working with him.  These kind of medical issues are never easy, but for me, watching Matthew and his family face this has been especially hard.

These parents are amazingly dedicated to Matthew's care, as well as the well-being of their other two children.  They appreciate every small thing that is done for them, and, except for asking me to work with Matthew, expect nothing of us but our friendship and encouragement.

We have chosen to help with Matthew's medical needs as much as we can.  If you would like to make a contribution to Matthew's medical care, you can donate through our Reason to Hope website, or send a check to the address on our donation page.  Please note that the donation is for Matthew's care, and we'll make sure it is directed appropriately.